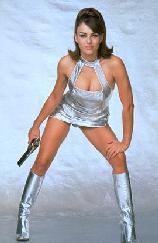 This story starts off with the air of anticipation as you wait for the first job offer, or your shiny new Porsche to arrive at the dealer, or kids waiting for summer break, or women looking forward to their wedding -- you get the picture. Yes, it was filled with hope!

Well, we were not materialistic. We didn't want money or fast cars, but we were carnal (just that day). A pretty lady joined our work place lately. Mini skirts, button-popping tight dresses, no panty hose...oh mama! Our own Ally McBeal...actually better.

Well, what better way to get to know someone than over a round of beers. So I invited her to join a couple of us for an evening of beer and fun. Surely every male in the group wanted to talk to her over a few beers when the wall of fear and inhibition dropped. They were mentally the Bruce Willis or Brad Pitt in the bar and she would get rid of her husband or boyfriend or whatever and run away with them.....who said alcohol was bad for you??

We waited at the table sitting on the most uncomfortable chair I have sat in my life. Wild hopes of things that would happen and guffaws filled the air as we gulped down those pint beers to morph into Brad Pitt, Bruce Willis, and Pierce Brosnan.

She would walk right through the door at 6:30pm and meet us all and talk to us and get drunk and act silly. It was 7pm when someone said, "that's alright, she just has a few things to take care of at work." We hoped he was right. By 8pm, we had munched on the chicken wings and beef ribs. A 4th round of pint beers and it was 9pm. What was amazing was that some people still had hopes that she went home to freshen up and would walk in with the skimpiest and tightest clothes on to make up for the hours she kept us waiting. PFFT... I sensed a rebellion building up since I invited my friends and promised them that she would be there. The guys were already talking about how they would punish her (you know what I'm saying??)

I deflated my Bruce Willis image and crept out of the bar at 9pm knowing that I may get knocked over with a bottle of beer if and hung around longer. She never came, and she would never come albeit my friends waited till 11pm getting their butts numb on those weird bar stools. PFFT! She raised up her demand and kept our imagination running.

The boys are still waiting to know her.